Dialogue On the Hidden God (1444) is a short conversation, written by Nicholas of Cusa, between a Pagan and a Christian on the topic of God, specifically on how we might know, or not know, God. A Pagan comes across someone engaged in the act of worship, prostrate and weeping, and is curious. What is this person doing? Who are they worshipping? Why are they worshipping? The Pagan finds out that this person is a Christian and begins to probe as to what sort of God the Christian worships.

Pagan. What are you worshipping?

Pagan. Who is the God you worship?

Christian. I do not know. 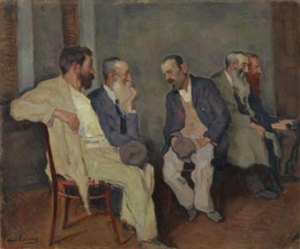 The Pagan is confused. How is it possible for someone to worship something they don’t know? Is this Christian an ignorant klutz?

Pagan. How can you so earnestly worship that which you do not know?

Christian. It is because I do not know that I worship.

This of course seems paradoxical. Normally, if we have a conversation with someone, we know something about them (even if it is the most basic fact of the other person being a human). We know what and who we are speaking to. If we don’t know what we’re speaking to, but we’re still speaking, we’re liable to be considered crazy. Likewise, religion has as its subject (or object) of worship, some sort of Divine Being (who may or may not be human), a Life-Force, an Energy, or something supremely Other. But the Christian in this conversation apparently has no clue about who or what he is worshiping. This “God” that the Christian speaks of, is unknown, even to the Christian. The Pagan finds this Christian incredible.

But the Christian finds the opposite incredible. He turns the Pagan’s admiration on its head and states that “It is even more amazing to see a person devoted to that which he thinks he knows…Because one knows that which one thinks one knowns less than that which one knows one does not know.” To simplify, the Christian is saying that if we claim to know something, we actually don’t know it (or at least, we don’t know as much of it as we thought we did). We believe we know something, but really, deep down, we have barely been able to even begin to grasp it. In fact, it is much wiser to say that we don’t know something because that is more true.

Take for example a human relationship, a friendship or a marriage. Do we really know the person we are friends with? Or does someone really know their spouse? Sometimes, after years of being married, a spouse will say to their mate “I don’t even know you anymore,” meaning that the spouse has changed so much that they have become a stranger. Other times, a romantic spouse will say “After 60 years of marriage, I am still getting to know her,” implying that their mate is a mystery they have been trying to plumb the depths of for decades. Two different acknowledgements of not-knowing; one negative, one positive.

What does the Christian in Nicholas of Cusa’s conversation mean by knowledge?

Christian. By knowledge I understand the apprehension of truth. Whoever says that one knows is saying that one has apprehended the truth.

There is a sense of totality and finality in the Christian’s definition of knowledge. One has knowledge when they have grasped the truth in its totality, in all of its nitty-gritty details. The Pagan agrees to this. But then the Christian poses a problem:

What the Christian is saying is that the truth is not secondary. It is the cause of all things, including reason itself (our apprehension). Truth cannot be subordinated to reason, otherwise something greater than truth would exist. The apprehending (our intellect) does not surmount the apprehended (truth). When asked whether or not truth can be ascertained through something else, the Pagan replies “perhaps.” But the Christian remarks that he is mistaken.

Nicholas, via the Christian, is arguing that we cannot apprehend the truth through anything outside of the truth, in other words, through something like the truth (“likeness”). This would contradict the very indivisibility and totality of truth. Truth cannot be judged by anything that isn’t truth itself: “Just as a non-circle cannot measure a circle, for the being of a circle is indivisible.” (DDI, I, 3, 10) One circle can measure a circle, but a triangle cannot measure the circle. (Cusa has some mathematical examples that explains this, but me, being mathematically challenged will take him at his word.) Nicholas states that “the intellect is related to truth as a polygon to a circle.” (DDI, I, 3, 10) Or, the finite cannot comprehend the infinite. This leads Nicholas to conclude that “the intellect, which is not truth, never comprehends truth so precisely but that it could always be comprehended with infinitely more precision.” (DDI, I, 3, 10)

Thus, the Christian in Nicholas’ dialogue is essentially arguing that our intellects are incapable of ascertaining truth in any perfect manner. We will always be in a position where there is more of the truth to apprehend. To say that we know the truth, then, is to speak incorrectly. “Consequently,” Nicholas writes, “we know of the truth only that we know that it cannot be comprehended precisely as it is.” (DDI, I, 3, 10)

The Pagan asks a good question in response to the Christian’s argument.

Pagan. But how, therefore, do I come to know what a human being is, or a stone, or anything else I know?

The Pagan asks how we know anything. Doesn’t our ability to say “This is a human being” and “This is a stone” mean anything? Aren’t we in some way claiming to know the truth about these two things? “I know what a human being is,” the Pagan says, “and I know what a stone is.” Or, he could have said “I know you are a Christian” to his dialogue partner. We know things. Don’t we?

Christian. …You know nothing of these; you only think you know…

The Pagan, according to the Christian, is living with the illusion that he does know the essence of the human being or the stone. A personal anecdote might be a good example since it touches the Pagan’s question. Last year I was giving a lecture in an introductory theology class on Incarnational Humanism. While the two points of the lecture was to introduce the students to the possibility of common ground between humanists and Christians and to show that Christianity and humanism are not incompatible, the other aim of mine was to get them to start thinking about the question “What does it mean to be human and what can the Incarnation tell me about that question?” Well, after about fifty minutes of giving examples of different Christian understandings of the human person and talking about things like our physicality, our soul, etc., a student raised her hand and said “What does it mean to be fully alive, fully human?”

I was speechless except for my “Ahhs” and “Umms.” Feeling the pressure to have an answer (because after all, that’s what teachers are supposed to have. Right?) I fumbled around with some thoughts until I said, “You know, that is exactly the question I want you to ask, and the reality is, nobody really knows. We’re all trying to figure that out in one way or another.” I do not know what it means to be a human being. I don’t know what love is. I don’t know what it means to be a friend.

Nicholas’ Christian character replies to the Pagan’s question regarding our ability to know what a human and a stone are.

Christian. …For if I ask you about the [essence] of what you think you know, you will affirm that you cannot express the truth of a human being or a stone…